Who is Homewise and why do we exist?

At Homewise, our mission is to help people achieve their dream of
homeownership. We do this through our comprehensive real estate and lending services designed to support working families and individuals. We also develop communities that are affordable to a variety of incomes in order to meet the incredible demand for affordable housing in Santa Fe.

We are a nonprofit lender, also known as a Community Development Finance Institution (or CDFI for short). Any profits we make on our
developments come back to the organization to support our mission. 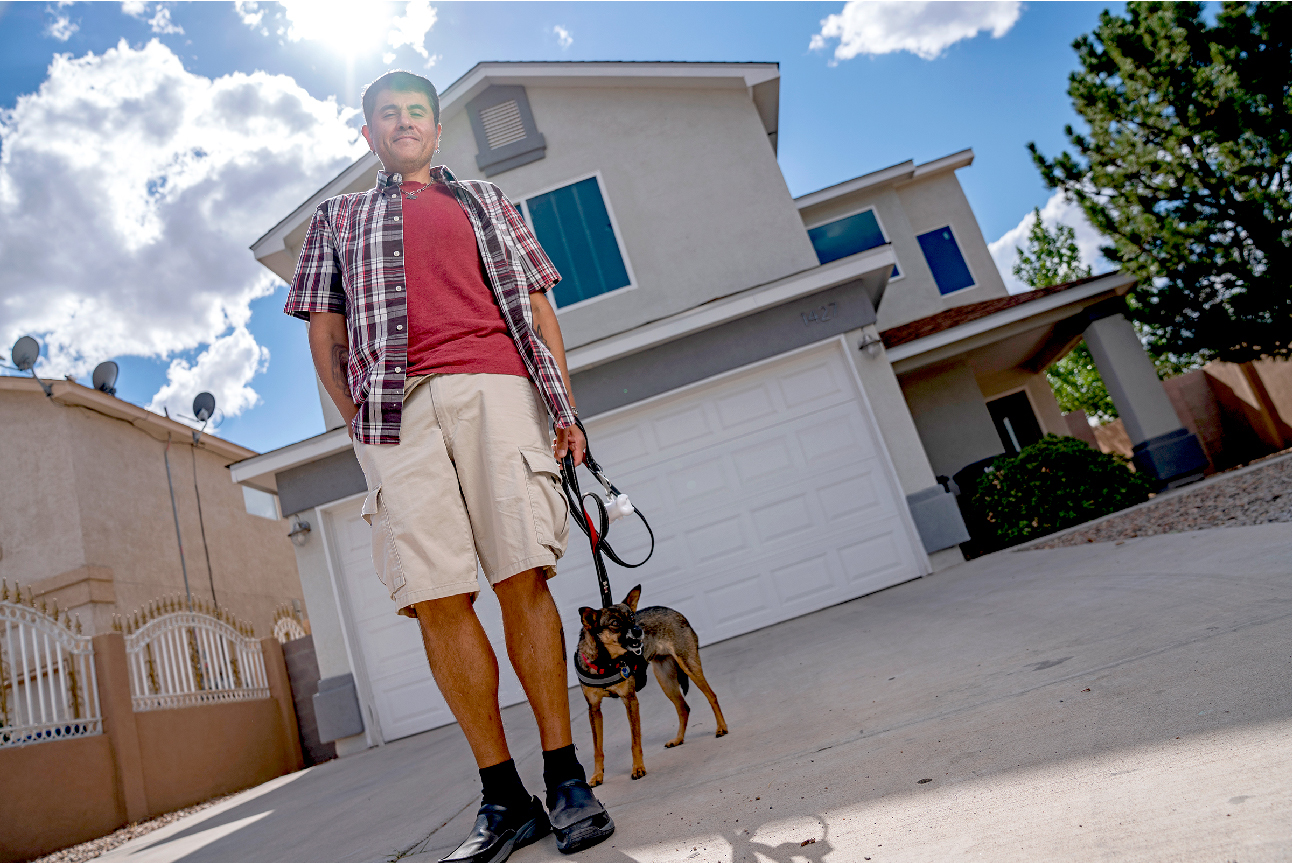 What Homewise is proposing to do…

One of our most recent proposed communities, called Los Prados, entails the conversion of 22 acres of vacant land on South Meadows (between Airport Rd. and Rufina St.) into a community comprised of both new affordable housing and an active park. Homewise’s original proposal was to build affordable homes, develop a facility for the THRIVE Community Charter School, create an active public park where kids could play, and increase access to active parks and trails for Santa Fe’s Souths Side community. Because the City has been reluctant to accept and maintain new parks, we initially proposed the school and the homeowners association would take on the responsibility to maintain the park while making it available for use by the public.

Based on input from neighborhood meetings, door-to-door canvassing of area residents, and conversations with civic leaders, Homewise has significantly revised its original proposal. We are still committed to accomplishing all four original goals for new affordable homes, an active public park families and kids can enjoy, the expansion of a robust trail network, and a high performing public school on the Southside. However, we have significantly revised our plans for the site to address resident concerns, primarily related to traffic.

We will no longer pursue a school facility on the site. Instead, we will focus on building homes that will be affordable for Santa Feans to purchase. This change also allowed us to significantly increase the size of the public park, now planned for more than 6 acres, about the same size as Las Acequias or Patrick Smith park. Additionally, we are proposing that the park be maintained by the Parks Department of the City of Santa Fe and that it connect with the extension of the Acequia Trail corridor (a walking and biking path). 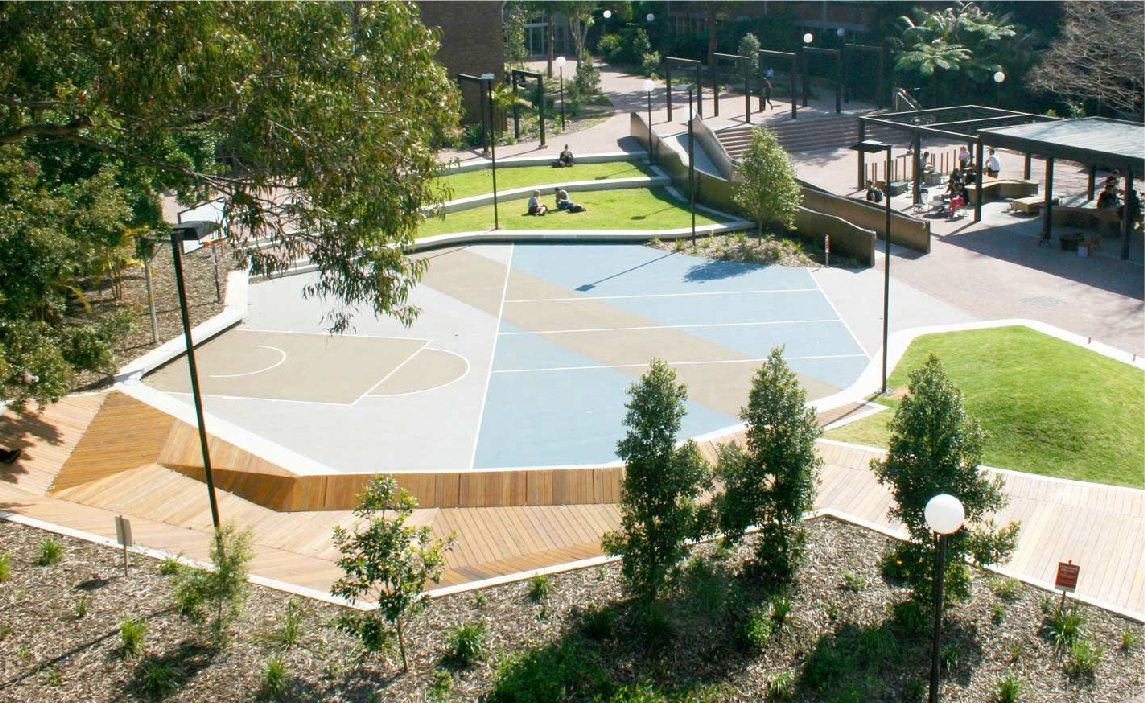 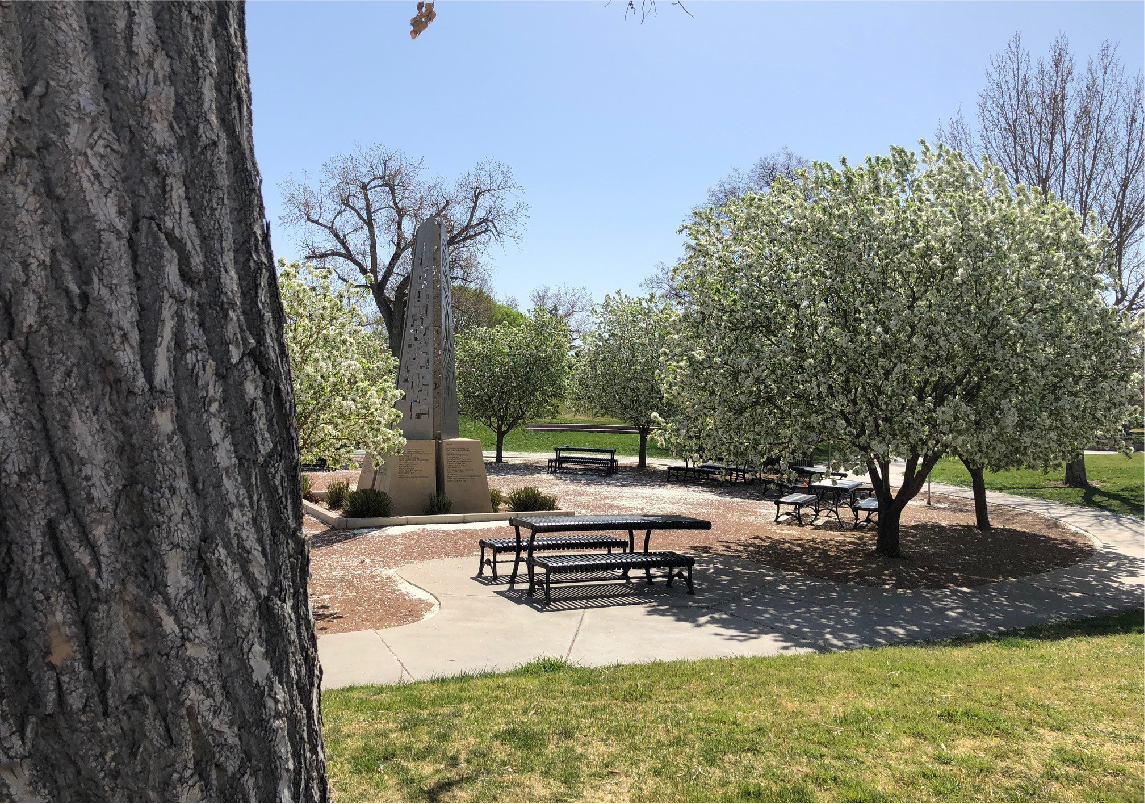 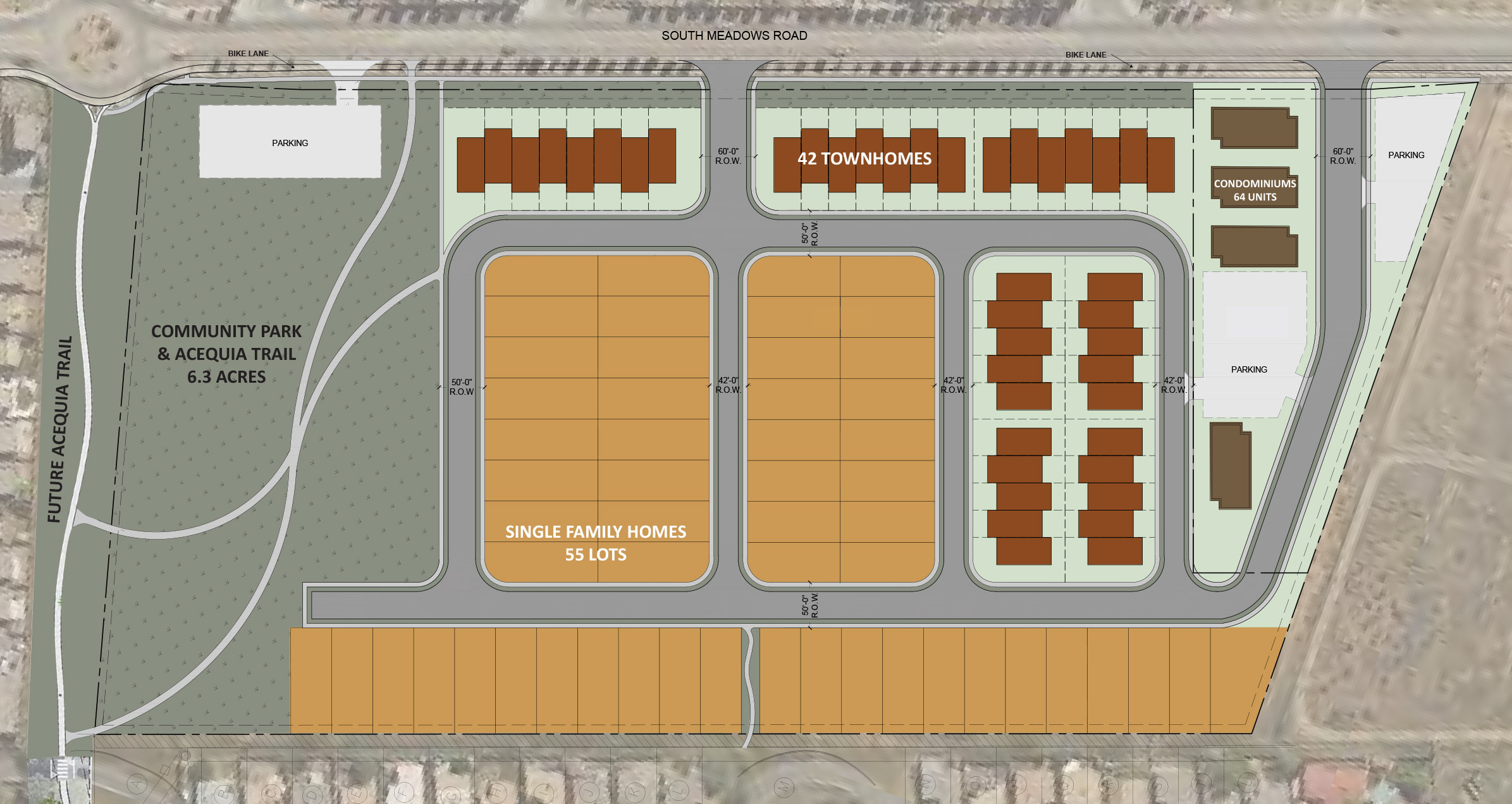 Why do we need affordable housing at South Meadows (and everywhere else in Santa Fe)?

As all Santa Feans know, our city is facing the most severe affordable housing crisis in its history. The median price of a home in Santa Fe county now exceeds $600,000. Unless you have an annual income of at least $120,000, and savings of at least $50,000, you cannot afford a median-price home. The only opportunity for homeownership might be Albuquerque or Rio Rancho, which is what many Santa Feans are choosing, leaving them with long commute times and less time with friends and family. 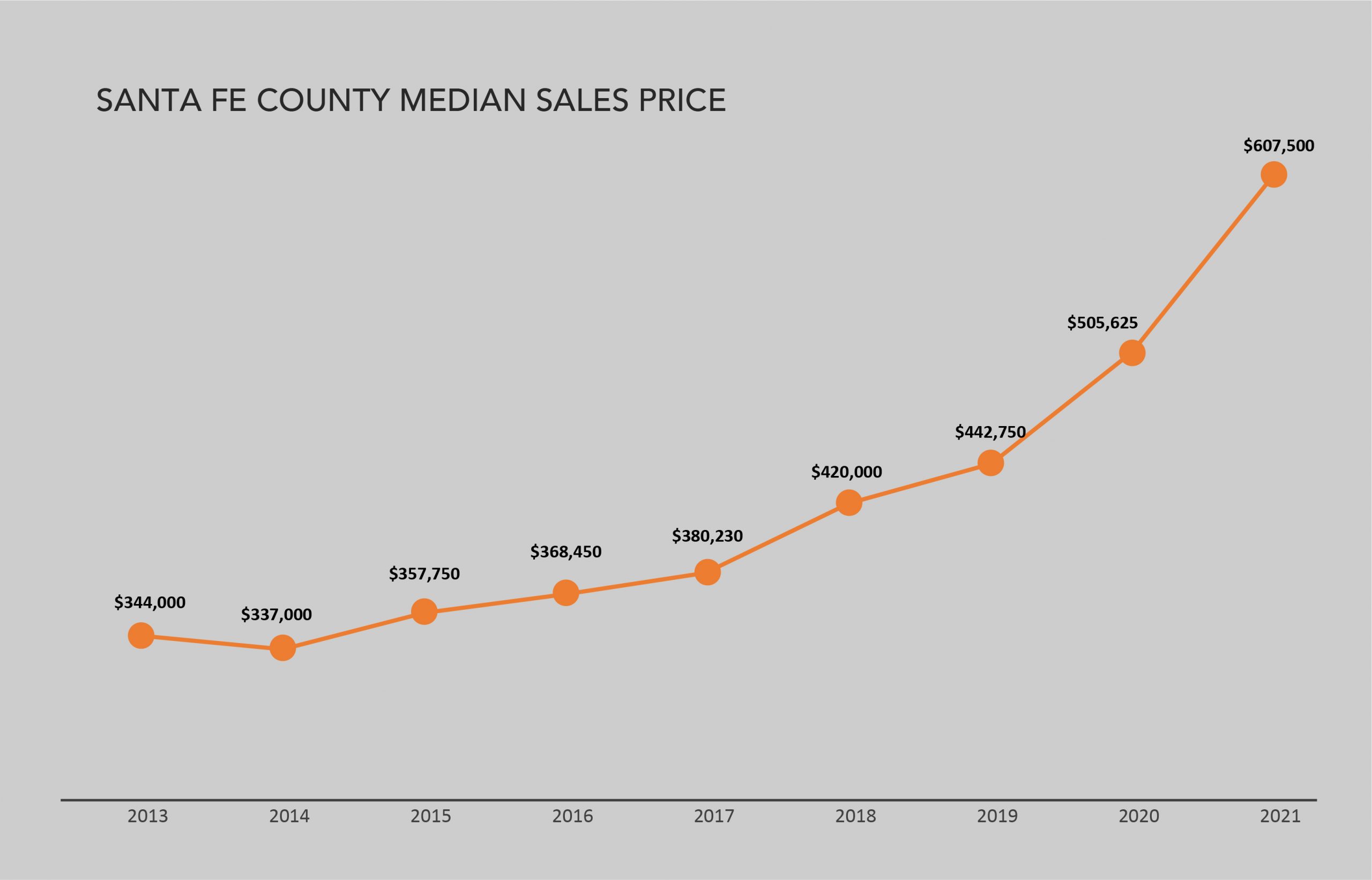 Despite our very expensive housing market, many people are still working hard to be able to purchase a home in their hometown. Right now, Homewise is working with 1,881 Santa Fe households to become homeowners. Some are just starting out and are working to improve their credit ratings. Others are paying off credit cards in order to free up resources for a house payment or are saving for a down payment. They are all working hard to realize their dream of becoming homeowners and they will all need a home priced below what Santa Fe’s housing market is currently offering.

Los Prados will help address our affordable housing crisis. Like all of our projects, Homewise will build homes that are affordable to working families and individuals, with home price as low as $128,500. All the proposed 161 homes will be priced well below the median price of a home. Half of all homes built will meet the City’s guidelines for affordable housing, which is 2.5 times the required 20 percent affordability standard. A teacher earning $50,000 will be able to purchase one of these homes. So will police officers, nurses, and hospitality workers.

The plans are to offer three different housing types at Los Prados – single family detached homes with yards, townhomes with patios, and condominiums with just one or two bedrooms.

Why do we need a park at South Meadows?

There is a great need for accessible green space on the South Meadows site. The area around it is one of the most densely populated and rapidly growing areas of Santa Fe. Residents of this area are more likely to be younger than within Santa Fe overall; in fact, over one-fourth of all Santa Fe youth live in this sector. Only 16 percent of residents in this area live within a 10-minute walk to a park, compared to the citywide average of 50 percent of residents. For all these reasons, we believe that and accessible park space designed for all is highly needed in this part of Santa Fe.

In surveying over 120 residents, we know that active park use is a high priority for the majority of residents. In particular, residents want shade pavilions, picnic tables and benches as well as play structures and basketball courts for kids and young adults.

Homewise proposes designing and building a park that will connect with an extension of the acre Acequia Trail Corridor. The park will be fully accessible to all surrounding neighborhoods and the public. While we are still getting feedback from area residents and park designers, we envision a park that invites the public to enjoy its diverse amenities. Some of the features could include play structures and equipment, basketball courts, and a multi-use fileld that would accommodate activities such as soccer, kick ball, baseball, and volleyball. Other features might be walking paths, picnic areas, a community garden, designated areas for dogs, and even an outdoor classroom. Public art such as sculptures and murals could also serve as an attraction. We believe a good park is a well-loved park, one that people use all throughout the day to enjoy time outdoors with friends, family and neighbors in a wide range of active or leisurely pastimes. 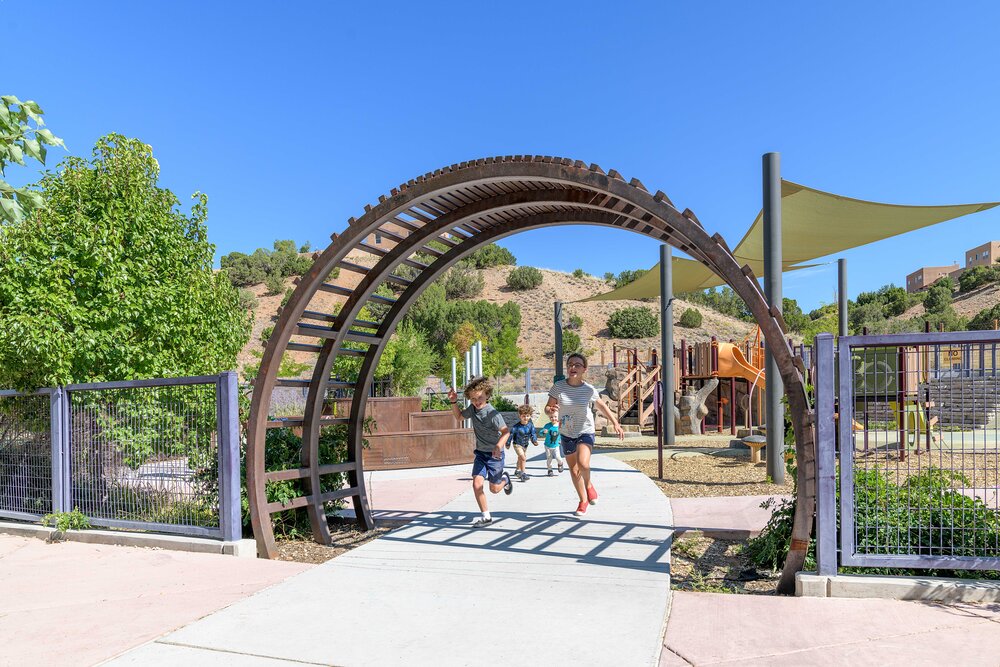 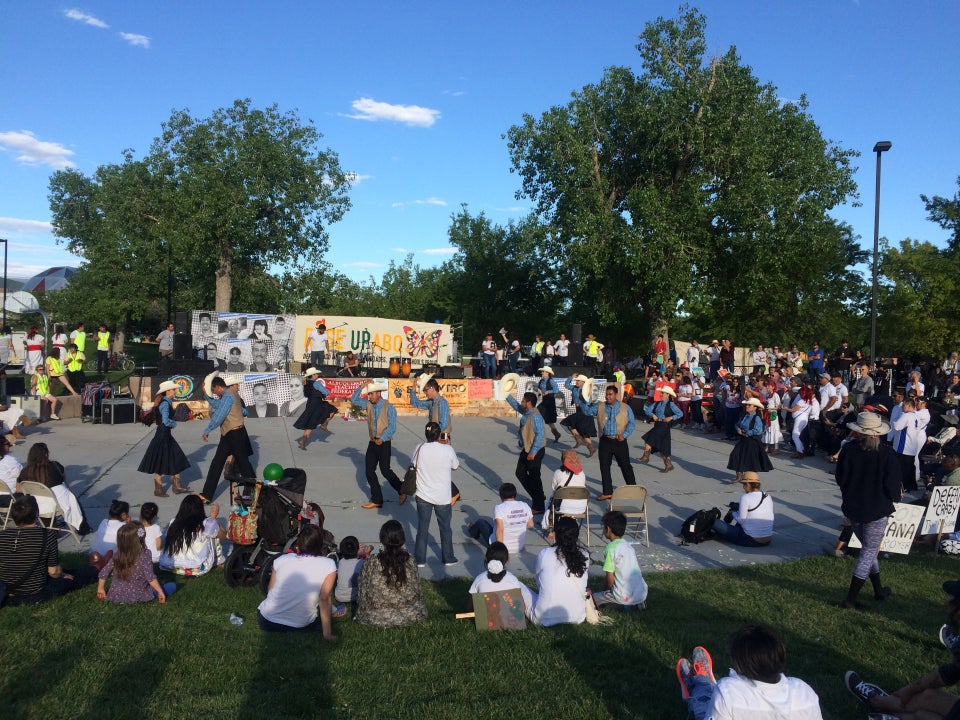 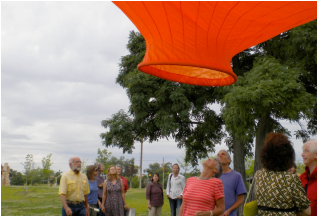 Homes facing the park will make it feel enclosed, with eyes on the park that increase safety. The various uses inside of the park would also have the benefit of ensuring the park is used at various times throughout the day and evening.

How will the park be designed with the Acequia Trail in mind?

This site is also a critical area for bike and walking connectivity for residents. We will prioritize making those connections through the park. The Metropolitan Planning Organization (MPO), a cooperative effort of the City and County, has developed plan for a robust network of walking and biking trails that serve Santa Fe. Included in the MPO’s Phase A priority projects (to be completed before 2024) is a one mile extension of the Acequia biking and walking trail that will link the Rufina bike lane, which currently dead-ends at South Meadows, with San Felipe Road. This section will connect the Acequia Trail with the south end of the River Trail. Eventually this trail network will connect the Southside to downtown on the north and La Cienega. First via the Acequia and River Trails, to the Southside Library and Swann Park, and second via the Tierra Contenta Trail, to the Metropolitan Recreation Complex and all the way to Diablo Canyon via the Camino Real Trail. 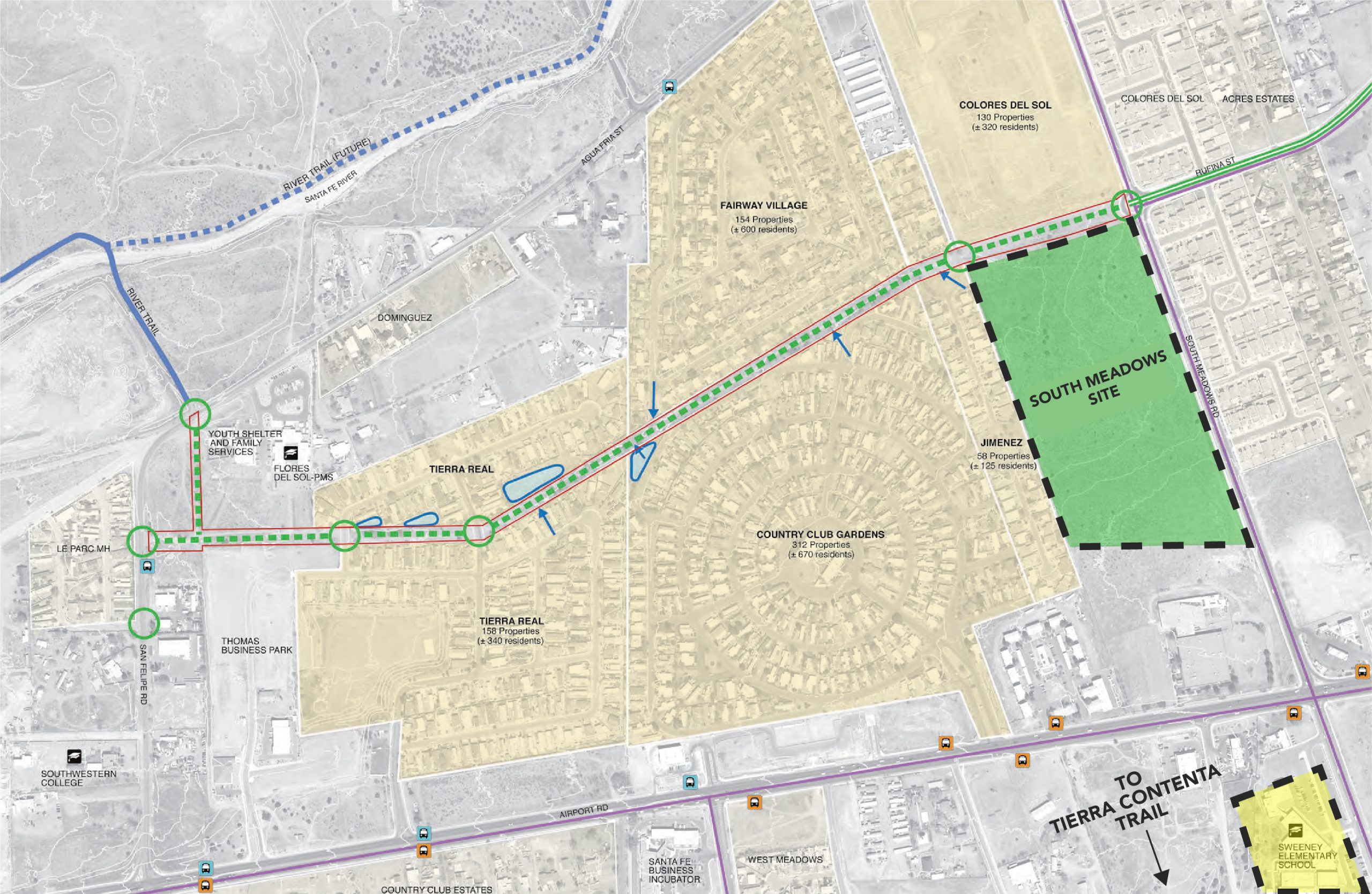 This connection will also improve the Safe Routes to Schools program in the neighborhood, allowing kids to walk to Ramirez Thomas by trail and providing access to South Meadows for kids walking to El Camino Real Academy, which is located less than a half mile from the Cottonwood Mobile Park, where many of the students live. There are no safe walking or biking routes for the more than 200 students (of 788 school students) living in the mobile home community. Students are dropped off by vehicles creating school traffic congestion, increasing traffic air pollution, and decreasing students’ ability for physical activity by commuting to school. Finalizing the Acequia Trail will have a significant positive impact on the health and safety of these students and will reduce the traffic burden on the neighborhood.

Homewise is committed to working with both the City and the County to complete this trail system and to ensure it is connected to the Los Prados development community and park. The County has agreed to dedicate 100 percent of the proceeds ($1.79M) of the sale of the South Meadows property to the expansion and improvement of this trail system.

Why does Homewise believe in infill development?

Over time, cities have a tendency to grow in a sprawl growth pattern centered around the car, and Santa Fe has been no exception. Our geographic footprint has expanded significantly over the last several decades as subdivisions, often solely made up of single-family homes, have pushed the edge of the city further and further south and west.

One problem with this type of car-centric, low-density development is that it is bad for the environment. It doesn’t provide enough people living within an area to support public transportation and therefore requires residents to get in their car to do anything: shop for groceries, eat at a restaurant or take their kids to school. What follows is the construction of large, multilane roads to support car traffic, making walking or biking along these streets very inhospitable, unpleasant and often unsafe.

While opponents to the Los Prados project claim that developing the site will lead to the destruction of “open space” home to wildlife, the greater threat to animals and our beautiful natural environment is that we will continue to develop further and further out, rather than finding opportunities to add housing and mixed- use developments in vacant land already within the city and/or county limits. This type of development, known as “infill development” because it fills in empty areas within a city, is a much more environmentally friendly way to build the housing that our city desperately needs. Well-designed infill development projects can not only bring affordable housing, but they can also provide other amenities such as green space, walking and biking trails, and commercial spaces; all amenities that can help make neighborhoods more pedestrian friendly. Additionally, they can create the kind of density that can actually support a well-functioning public transportation system as well as a thriving local business community. For all these reasons and more, Homewise believes very strongly in the importance of developing infill areas in the City of Santa Fe. 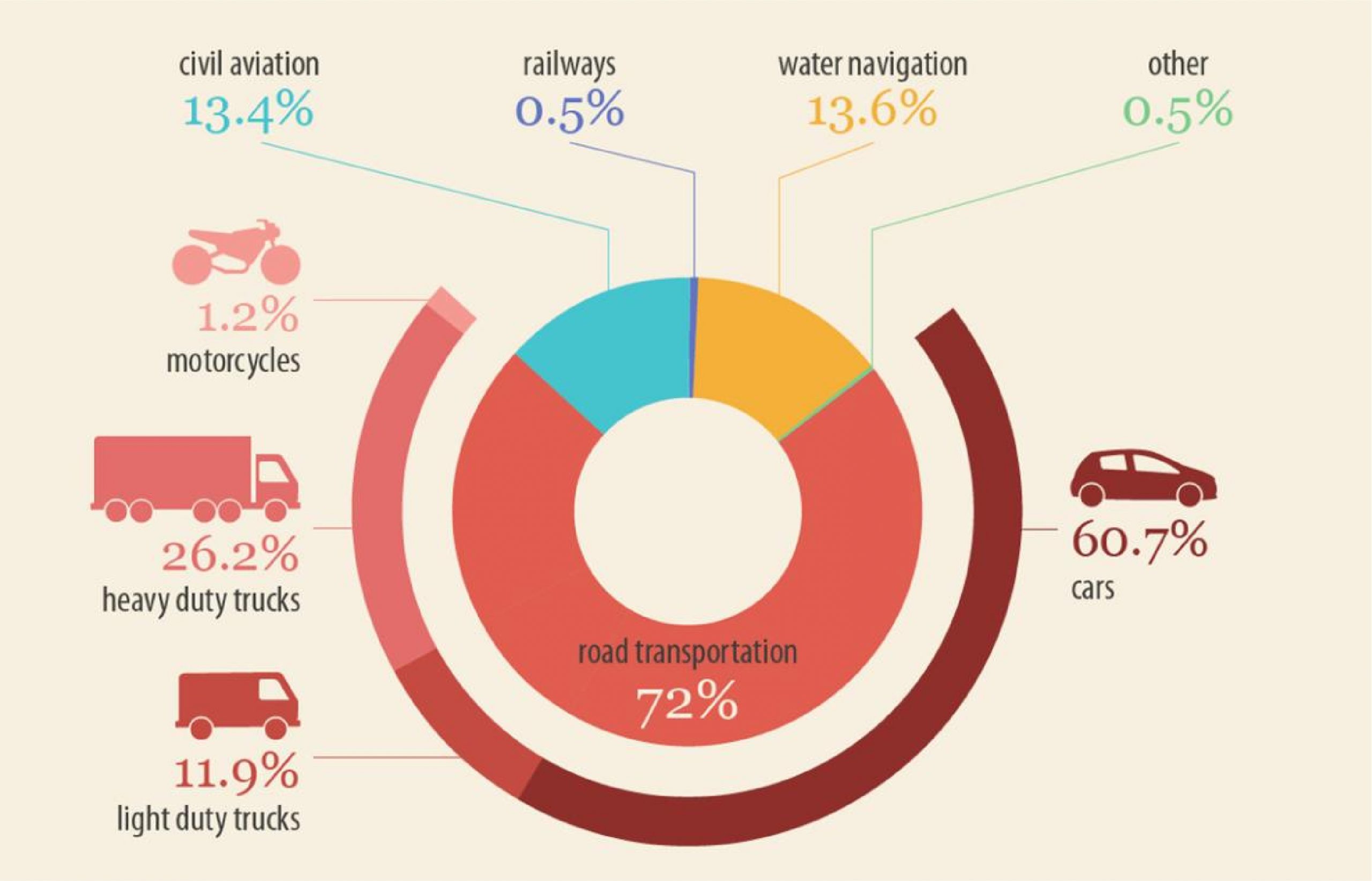 What is the opposition to the Homewise proposal?

There is some opposition to our development plan, most from adjacent neighbors who want the 22 acres to remain vacant land as it is now. They say that the land is already a public park that serves the surrounding communities, which is inaccurate. The current site is not truly accessible to the public. It is fenced off with “Smile, you’re on camera” signs posted on the chain-link fence. It is not a park kids can safely play in as there are no play structures or equipment, no ball fields, no picnic tables and cactus covers much of the area. It is a significantly underutilized area; we know this from tracking resident use over two beautiful fall days. Over a twelve hour period each day, only 14 people entered the area the first day and only 11 the second— only one of these people was a child. 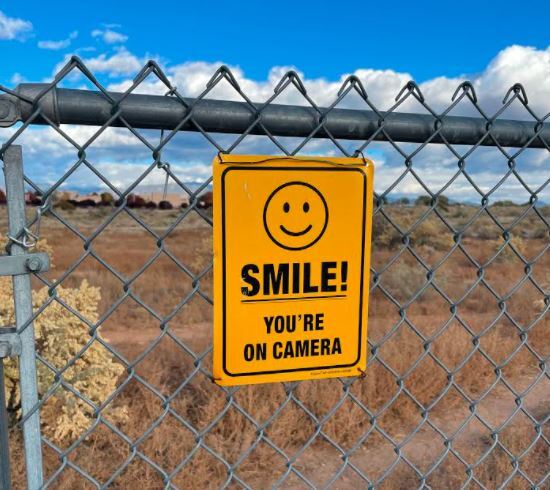 At Homewise, we believe that we can have affordable housing, an active park that truly serves the surrounding neighborhoods, and connectivity to an active trail system. We can avoid pushing affordable housing further out into the county, increasing sprawl, lengthening commute times, and adding to our carbon foot print. If you are inspired by this vision and want to help make it a reality, please fill out the short contact form below

PLEASE GIVE US YOUR FEEDBACK

PLEASE GIVE US YOUR